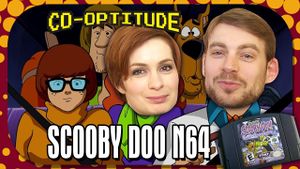 Felicia: "I'm a huge Scooby-Doo fan. As a kid, I always wanted to be Daphne, now I look like Shaggy, so…"

Ryon: "Wow, the things you learn on Co-Optitude."

Felicia: "I always liked Scooby, and I always felt sorry for him that his owner was Shaggy."

Ryon: "You know Shaggy's blowing pot smoke in that dog's ear every night."

Ryon: "Why did they park the Mystery Machine on the lawn? Like, seriously."

Ryon: "Shaggy, just get on something harder like heroine and just stay in the back of the van."

Ryon: "Oh, whoa whoa, what am I doing? I just solved a puzzle by complete accident. This is my kind of game. I was literally running in random directions, clicking random buttons on the controller, and I solved the first puzzle of the game."

Felicia: "Well, that's how we're gonna get through this."

Felicia: "Would you open the door so I can give you a Scooby Snack? Please."

Felicia gets out Scooby Snack

Felicia: "I'm not putting it in your mouth."

Felicia tosses it in

Ryon, laughing: "If I choked on that you'd have the first death on Co-Optitude."

Felicia, looking at Velma without glasses: "Look at her eyes though! Because I wear glasses, and if you take my glasses off I'm not like [squints]"

Felicia: "Oh, we're okay. So basically this is for babies. I love baby games! Baby games are the best!"

Felicia: "Who would do this to a five-out-of-ten woman?"

Felicia: "Where are Fred and Daphne? Was the van rocking when we went around?"

Ryon: "This is total stoner science. It's like making stupid shit out of other stupid shit."

Felicia: "No, it's MacGuyver."