Felicia and Ryon play BattleTech: A Game of Armored Combat. 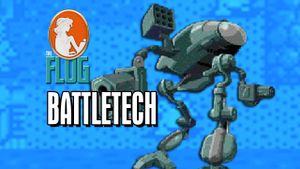 Felicia: "Brought this guy back for some more gamin'."

Ryon: "BattleTech. Another game I've never played before, and the color palette, unlike other games, is very poopy. They're battling over turd world here."

Ryon: "Dwayne 'The Rock' Johnson's giving us our orders."

Felicia: "You do nothing. You're feet."

Felicia: "What do these numbers mean ever?"

Ryon: "I think that means that's how much they cost, because in this world, even though we're in the military, we have to buy our own shit."

Felicia: "Don't waste your ammo on the buildings!"

Ryon: "They're enemy buildings. They don't deserve to live."

Felicia: "I know, but don't waste your ammo. This is like the fucking Depression of video games. You gotta get some coupons."

Ryon: "I think we shouldn't touch that."

Ryon: "The Rock is not pleased."

Felicia: "There's no 'You did your best.' That guy doesn't—"

Ryon: "Oh, do the fucking radar. [looks at radar] I can derive no information from what is going on on this screen."

Ryon: "I know, right? This is good teamwork. I feel closer to you as a brother already."

Ryon: "This guy came up on us when we were cooling off. That's like going to a man at a urinal while he's pissing and—"

Felicia: "Life lesson: you burn one bridge, and you just get more."

Felicia: "We gotta go inside that. That's what every guy says."

Ryon: "Oh man, we are so— The Rock is gonna be fucking shitting his pants in glee. Oh, The Rock loves us! 'Congratulations, I never thought you would make anything of yourself as a kid, but I'm not as disappointed as I was when you didn't make first in the gymnastics competition when you were eleven.'"