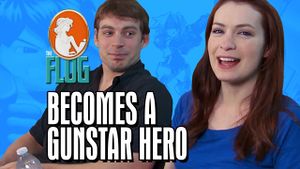 Felicia: "Don't ever say that again."

Ryon: "The meaning of continue seems to be really different from what I would define as continue, because we're not actually continuing."

Felicia: "You fucking piece of shit!

Felicia: "What the hell?"

Ryon: "That is what I imagine a 4Chan troll looks like. Fat kid wearing sunglasses and a giant computer. [in stereotypical geek voice] 'Excuzhe me, you guyzh are ruining video gamezh.'"

Ryon: "That was the quickest we've ever died! We're regressing!"

Ryon: "A moose knuckle is when a man's penis and balls make an outline against his too-tight pants."

Felicia: "There's something wrong with my pad."

Ryon: "You're not just bad at the game."

Ryon, laughing: "You're genuinely angry now! There's no more games with you!"

Ryon, as geeky boss: "'You're ruining my schuit! And video gaming!'"

Felicia: "I'm gonna try to keep as much vitality as possible, which is a good—"

Ryon: "That's generally a good strategy for any game. This is pro gaming tips by Felicia Day. 'Try not to let your life go down.'"

Felicia: "You are the worst!"