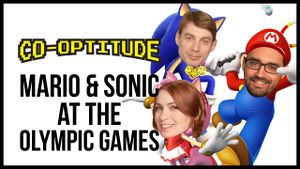 Felicia: "Before we were rolling, Hector was bragging like a bragster about his 'unbeaten' record."

Hector: "I am unbested at Mario Kart 64 at 100cc and I'm playing Donkey Kong and it's Toad's Turnpike. Me versus one other person. Never been defeated."

Felicia: "Wow, that is really—"

Ryon: "Okay, so people said that the London Olympics logo looked like Lisa Simpson giving a blowie. Do you see it?"

Ryon: "Do you see it? I see it too. Lisa Simpson giving head."

Hector: "What are his drapes? Are we doing brown hair or black mustache?"

Ryon: "He's got a shock of bright red pubes."

Felicia: "No, no, because the mustache is the same color as the pubes."

Hector: "Is that a scientific fact?"

Ryon: "London Party. Sounds like something dirty, ya know?"

Ryon, laughing: "It's not the same as a lemon party."

Felicia, reading in English accent: "'London Party lets you play a variety of events and bonus games while roaming the streets of London with Mario and Sonic.'"

Felicia, reading Lakatu's dialog: "'I'm getting chased a lot lately, and I think it's because [shifts into English accent] of a rumor that I have a ton of stickers.'"

Hector: "He doesn't have an English accent. He's from the Mushroom Kingdom."

Ryon: "What does the Mushroom Kingdom accent sound like?

Ryon: "So we're going to beat him up and take his stickers. We're sick."

Felicia: "What kind of Olympic spirit is this game?"

Hector: "I was clearly in first place, and now everybody just won as many stickers as I did? Shenanigans on this game! I call shenanigans!"

Ryon: "If everyone's special, no one is special. Ayn Rand did not design this game, that's for sure. She was not the game designer."

Hector: "Hey guys, I have a feeling we're all gonna win."

Ryon: "In our own special way?"

Felicia: "I have a feeling that this kind of game, it is. And that is really the message of the Olympics, is that everybody is equal and everybody wins."

Felicia: "This is literally— Okay, you know what this is? This is like going to a party and somebody's mom over-programmed everything, so you can't have any downtime and just like—"

Ryon, in falsetto as a mother: "'Alright children, it's time—'"

Felicia: "What is this!? You look like an idiot, by the way."

Hector: "Whoa! You see that move? No, I look really good."

Hector: "'Okay, you're done putting stickers on your sheet.' Thanks, Cream."

Felicia: "I don't like saying the word 'cream' out loud."

Ryon: "Look at him. Turtles can be graceful too."

Ryon: "Bowser Jr has something to prove about his species. People said turtles couldn't be graceful, but they're wrong."