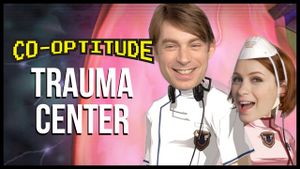 Felicia, with stethoscope: "I'm gonna listen to my heart while you introduce the game."

Felicia, reading: "'The Wii Remote is your scalpel.' Oh shit! No, for reals, I've played this game when I first got the Wii, and it's hard."

Ryon, laughing: "'EASY!' You should narrate this shit."

Felicia: "Wait, look at this simile. 'Watches over the town like an old man.'"

Felicia: "How is that a valid simile? That's not something— Analogy? Which one is it?"

Ryon: "It's simile, cause it's similar."

Ryon: "A metaphor, you're saying the hospital is an old man watching over the town."

Felicia: "Are you sure?"

Felicia: "Alright. Internet, talk to us."

Felicia: "I got a whole 400 comments on a picture that I posted of me and my brother, which should have been 'my brother and I,' and it was like the grammar police were all up in my grill."

Ryon: "I mean, that's really horrible, that was a horrible mistake though. Like I can actually see their point."

Felicia, sighing: "Okay, the analogies are crazy. It's 'swallowed by the jaws of fate.'"

Ryon: "Okay, Bangs. Nurse Bangs is gonna bring him in."

Ryon, as Wiimote cursor is shaking: "Oh god, I have the hands of a drunk. My hands are— I got the DTs or something. I don't know what's going on there."

Ryon: "Check this out. I'm gonna sew him up like a sweater."

Ryon: "The white witch from fucking Narnia is here. 'He's eaten too much Turkish delight.'"

Felicia: "There's so much blood! Really? This fountain of blood is Gucci?"

Felicia: "What is that other flag?"

Felicia: "Alaska has a flag? I didn't think about it. I just— I dunno."

Ryon: "That's the vexillology lesson of the week."

Off-camera: "Weren't you a math major?"

Ryon: "I'm never gonna ask you to sew a button on any of my shirts, that's for fucking sure."

Felicia: "C" (as in the grade the game gave them at the completion of several levels)