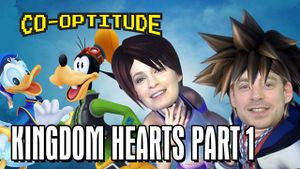 Felicia: "This week, we have a really special game that I've always wanted to play."

Ryon: "But they're all special, in their own special way."

Felicia: "Uhh, some of them are less special."

Felicia: "And I'm super excited, because this girl on the front, I look just like her. See?"

Felicia: "Who are you particularly not eager to see, as a Disney character in this game?"

Ryon: "That guy. That fucking guy is just the shittiest."

Felicia: "I hate Donald Duck. I feel like he spits when he talks. I have this weird sort of sensory situation that I'd love to be in where I take Donald and I tie him up and I—"

Ryon: "What does she do after she ties Donald up? Leave a comment!"

Felicia: "I wanna feel what his huge bill looks like and just kinda pry it open! Pry it open!"

Ryon: "So here's a fun piece of trivia. We were actually going to get a giant key made from the crack props department over at Geek & Sundry, but they decided that it was too much trouble to do so."

Ryon: "So we have no playful props for you guys this week. I'm sorry."

Felicia: "No. And you know who you can thank? You can thank Annie for that. So in the comments say, hey, thanks for not giving me an accessory this week."

Ryon, holding up a small key on a keychain: "Hey guys! We're playing Kingdom Hearts today! Look at me!"

Felicia: "Oh, the dedication of the production team on this show!"

Felicia: "Please, why are you eating jerky?"

Felicia: "No, it's not something— It smells like dog food."

Ryon: "It probably is. Probably comes from the same factory."

Intro text in game: "And who knows: starting a new journey may not be so hard or maybe it has already begun."

Felicia: "I think I would like that as maybe read at my funeral, because that's a new journey of being dead and rotting."

Felicia, as Riku appears on screen: "Whoa. Girl or boy?"

Felicia: "That was some prepubescent booby."

Ryon, laughing: "You have shot Co-Optitude before, haven't you?"

Felicia, walking up to pedestal with wand on it: "Okay, so am I gonna be a magician with a branded—"

Felicia: "It's a branded wand."

Ryon, laughing: "A Disney branded wand. Like in plastic clamshell packaging from the Disney store."

Ryon: "I expect you to have this figured out by the time I come back from pissing."

Felicia: "It's much less amusing when there's one person."

Selphie's in-game prompt: "What's most important to you?"

Felicia: "This is an important moral question! 'Being number one', 'Friendship', or 'My prize possessions'?"

Ryon: "Since this is an RPG game, the answer is always C no matter what you may answer."

Ryon: "Yeah, that's the most important."

Felicia, reading Selphie's dialog: "'Is friendship such a big deal?'"

Felicia, reading Tidus's dialog: "'What are you afraid of?'"

Felicia, reading Tidus's dialog: "'Is that really so scary?'"

Ryon: "God, you're so judgy! You asked me an honest question, I give you an honest answer, and you judge me."

Felicia: "And his shorts are uneven."

Ryon, reading: "'You want friendship. You want to be strong. You're afraid of getting old.' Wow, you're just a bundle of neuroses."

Ryon, as Sora squaring off against enemies: "'Oh god, I just wanna be friends! Don't make me grow old, guys!'"

Felicia, as Sora: "'I wanna be strong for my friends before I die of old age!'"

Ryon: "'I just want her to like me, but until that day I just gotta—'"

Felicia: "You know what? Men who have no feelings and are apathetic and don't meet your eye? Sexy."

Ryon, as Goofy appears: "Ohhh, fuck you. Look at this fucking guy, man."

Felicia: "I would like someone to write a short story about Ryon getting transported to a world where Goofy is his only friend, and the journey—"

Felicia: "—of them understanding each other on a visceral level, and finally the last line is, 'You know what, Goofy? I thought I hated you, but now, you're my best friend.'"

Felicia, reading: "'Paopu fruit—' God, everybody's up on this fruit thing! This is how meth started."

Ryon: "It's a hallucinogen."

Riku, in game: "I get to share the paopu fruit with Kairi."

Felicia: "'I claim a woman.' Wow, that's fantastic. Does she have a say in this?"

Felicia: "It really is offensive! She's already shared a paopu, guys, with everybody."

Felicia: "Yeah! And that's her prerogative!"

Ryon: "Come on, gimme a coconut. Yeah, fresh coconut! Mmm, so young. My coconuts are so young and they're good. Soft, young coconuts."

Felicia: "All you have is the old shitty coconuts now."

Felicia: "Oh my god, I'm gonna kill you if you don't get on the raft."

Ryon: "I got extras! I would think you guys would be happy with me."

Felicia: "Okay fine. No, it's good to have an extra coconut when you—"

Ryon, as Kairi: "'You're such a friend! I'm glad that we never have to mess our friendship up with relationships or sex.'"

Felicia: "I know. I was just thinking that. It's disgusting."

Ryon: "Just really gross. He's like half rat, half dog."

Felicia: "If you cut that off it wouldn't even hurt him. It's like hair."

Felicia: "Now this game is getting on. After our WoW fetch quests intro. Now we're doing some shit."

Felicia: "Clearly, we need another episode in order to actually meet Disney characters."

Ryon: "And to bag on Goofy. [Goofy appears on screen] Oh, speaking of Goofy! The first thing I see is this loser. Ugh."