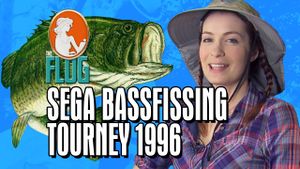 Felicia: "I feel like this is a terrible game."

Felicia: "Is this like an environmental lesson that there are no more fish in Arkansas? 'Cause that's what I'm seeing right now."

Felicia: "On another note, the red-haired gentleman who is escorting us through this game? Fish Fishburne. His name is Fish Fishburne, and seriously, he's wearing a hat that says 'Team Grandma' on it."

Felicia: "I had fish tacos last night for dinner, so I feel like I'm overly qualified for this."

Felicia: "I have to say that I'm so excited that I got one fish, because I really don't wanna play this game anymore."