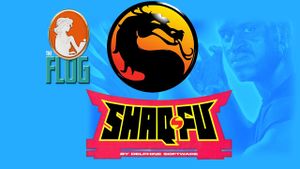 Ryon: "I think I'm recovered from the trauma that was Battletoads."

Felicia: "It was awful."

Ryon: "It was a truly horrible experience."

Felicia: "I actually woke up in the middle of the night thinking, 'OH! Toad!'"

Ryon: "I had nightmares. It was bad. I had to go to therapy."

Felicia: "Really? Did you talk in your chicken voice?"

Felicia: "Oh! Knee right in the peenaaaiss! Oh! That was in my vaginaaaa!"

Ryon: "I don't think this was his breakthrough role. The Orlando Magic were like, 'Man, I played this video game called Shaq Fu. We totally gotta get that guy on our team! He's gonna win us a championship!'"

Felicia: "Shaq is a large man. I actually stood by him one time, and my face came up to his like midriff."

Felicia: "Look at the size difference [between Nezu and Shaq]. That's gonna be interesting."

Ryon: "But during the intro screen they're still gonna be the same height. I guarantee it. Nope."

Ryon: "He's like Tom Cruise. He's standing on a box or something."

Felicia: "Why is Shaq doing handsprings!? This is not—"

Ryon: "He's like 8 feet tall! I don't think that man can do a handspring."

Felicia: "It's not a wookie hole?"

Ryon, laughing: "He's kicking me in the wookie hole."

Felicia: "I don't like seeing a big man like that move that fast. It's not— It's not good."

Ryon: "Not even nearly as good as I remember"