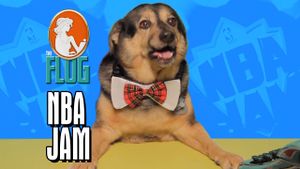 Ryon: "Heyyyy. What do we got today?"

Felicia: "These are not people on the team anymore, huh?"

Ryon: "No, you would hope not. That's why they aren't winning chamionships! They're still fielding players from '94."

Felicia: "Am I even controlling CPU?"

Felicia: "Oh, that's why he's better than the other one."

Felicia: "How do you get the ball from the air though?"

Ryon: "'How do you get the ball from the air?' I don't even know what that means."

Felicia: "See, this is not fun! I don't know either of these sports, the video game sport or the regular sport that I'm playing now."

Ryon: "Oh, that must make you a casual gamer."

Felicia: "I think that the CPU is playing the one that's doing things."

Felicia: "She's like, 'Hey, Peru, Greece, what up. Fix your financial system. And here's three points in your face.'"

Ryon: "What the hell? Why are you doing so well?"

Felicia: "Because Hillary is playin'! She's bringing her game. 'Hey, Soviet Union! Stop with the trade embargoes, yo!'"

Felicia: "Well, this just goes to show you, LA Lakers, if you had Hillary Clinton on your team, you would have done better at the champ's."

Ryon: "And it just goes to show you that DJ Jazzy Jeff richly deserves his complete obscurity. You let me down, man. You're no Fresh Prince."