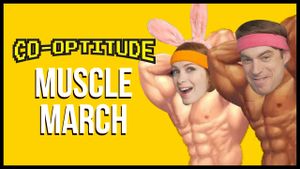 Felicia: "Today we're playing something a little wacky, as you can tell from the [in French accent] accoutrement."

Felicia: "The title of what?"

Felicia: "Ohhhh. So it's never gonna be a surprise, is it?"

Ryon: "No, it's never gonna be a surprise ever. It's actually never a surprise. No."

Felicia: "I never even thought about that! We give spoilers, like, immediately on upload we're spoiled."

Ryon: "When the sun comes out it is warm enough to wear tank tops, is the assertion."

Felicia: "No, you're not so good. Don't be so bold. This is a skill you have to learn over years."

Felicia: "Okay, first of all, this community is odd. Because I'm seeing penguins everywhere."

Felicia: "Did they actually get people who were this cut to run and see how their ass moved? Do like motion capture?"

Ryon, singing: "Gotta move your arms, gotta use your legs."

Felicia, scream-singing: "I'm! Gonna make a sceeene! Nobody else! No in between!"

Felicia: "He really needs to use a French-cut bikini, because if you run in a thong it starts to go up there and impede your blood flow. Do you know what I'm saying?"

Ryon: "Maybe it makes you run faster, like when you stick ginger up a horse's ass."

Felicia: "Have you done that?"

Felicia: "You cannot stick ginger up a horse's ass."

Ryon: "That's what you do, dude. Look it up on Wikipedia."

Ryon: "That's what you do to make a horse run faster."

Ryon, running in game: "AHHHHHHHH GET IN THERE! GET HIM! GET HIM! Yeah, fuck you!"

Ryon, in pose that should have registered correctly in-game: "Did you see me just standing here like this? Like for five minutes?"

Felicia: "You didn't flick! You gotta learn how to flick."

Ryon, flipping Felicia off: "I'm flicking you, does that count?"

Felicia: "Just heart everything. We have a heart-on for you too."