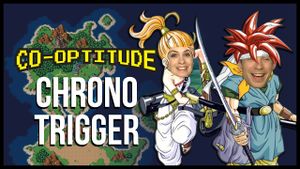 Felicia: "We were just talking about our ascots. How do you not be an ass in an ascot? Ha ha ha."

Ryon: "This is the 800-pound gorilla of classic Super NES JRPGs."

Ryon: "Where does Chrono Trigger sleep? Anywhere it wants to."

Felicia: "Um, okay, first of all, the graphics on this are amazing. I love—"

Felicia: "Any day of the week."

Felicia: "Well, there's nothing worse than like the puberty of gaming, which is basically N64 graphics."

Ryon: "Yup. Your balls are droppin', you have low polygon counts, your balls dropping, your voice is changing, you know."

Felicia: "Yeah, it's not a good time to be on camera for anything."

Ryon: "Your polygon count's low, you get hair in weird places."

Ryon: "He's got dreads, dude. Anuss has got it going on."

Felicia: "That's a Carrot Top head if I've ever seen one."

Ryon: "It looks like Sideshow Bob's sleeping in his bed."

Felicia: "Thank you to whoever in the Twitch chat who gave me that. I mean, I'm still a Peupie, but Nypps is kind of—"

Ryon: "You're still a Peupie girl, but Nypps are close to your heart."

Ryon: "The bright, festive looking place, dude, like every fair is."

Felicia: "I thought it was a playground."

Ryon: "With the exception of those like traveling fairs with the really dangerous rides that show up in parking lots and vanish."

Felicia: "Oh! Part of me wants to always go to those and just tempt fate."

Vajin's dialog: "Vajin: Hold your horses! I want to get some candy!"

Felicia: "I don't wanna get candy!"

Felicia: "Oh god. I'm gonna drag you by the arm like some kidnapper."

Felicia: "Goddamn, get your candy, bitch! Get it!"

Felicia, reading: "'…you'll get teleported—' Really!? This is not something I would trust at a fair. I'm sorry. When you're talking about scrambling my atoms and teleporting them across the room?"

Felicia, reading: "'Giggle'? She literally says it like this. Giggle."

Felicia: "Um, you're gonna be accused of murder."

Felicia: "Um, I would jump out that tiny window."

Ryon: "Yeah, can I squeeze through there? No, we're fucked, dude. We're fucked with a capital F. Alright. [passing by people in hall] 'Oh, no, how should I know where the queen went? Yeah, she's resting. She's resting comfortablyyyy!'"

Felicia: "Yeah. That is what we're doing. You are literally— You could write this game."

Ryon, singing: "Here's the story of three lovely ladies who were somehow their own ancestors in the past."

Ryon: "What? Why am I sucking my own ally off?"

Felicia, as Vajin: "It was awful! 'Cold, dark, and lonely.' It was like being poor!"

Felicia, reading Vajin's dialog: "'Why don't you come home with me?' Hell yeah!"