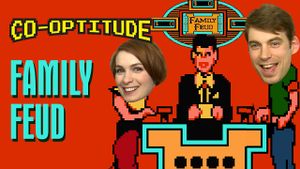 Felicia, laughing: "Oh god, looking at your face doing that was the most horrifying thing I've ever seen you do. Listen guys, it's Co-Optitude."

Ryon: "What else do they say? It's like, [DJ voice] all night long, all night strong! Right here!"

Felicia, laughing: "It's my brother!"

Ryon, laughing: "This is the worst thing we've ever done."

Felicia: "People, you've grown complacent with this. We've decided to be buffoons."

Felicia, guessing what Ryon's "HON" is going to spell: "'Hon…or your ancestors'? Oh."

Question: "Name something people do when they're stuck in a traffic jam."

Question: "Name something that people use to pick a lock."

Felicia: "I mean, this game is so dumb, it's gotta be right."

Ryon, laughing: "You've been playing too many role-playing games!"

Question: "Name a game families play around the kitchen table."

Ryon: "How about yelling at each other?"

Felicia: "What about shaming?"

Ryon: "Monopoly is the worst game."

Ryon: "No, five-thousand dollars says you're an average American."

Question: "Name something you always see on the news."

Ryon: "Not on this TV station! Not on whatever the fuck TV station."

Felicia: "Okay, that's the most meta answer I've ever heard! That is an asshole meta answer!"

Ryon, laughing: "You already made that joke!"

Felicia: "And it's really funny! Somebody in the background laughed."

Felicia: "What!? Never in a public restroom has a woman ever put on makeup."

Felicia: "Come on! What's a country that's an island?"

Felicia, as computer is entering "AUSTRALIA": "You gave it to them! THEY HEARD YOU!"

Felicia: "This 90s computer is owning our face."

Ryon: "Look at these fucks. They're gonna play all the way through."

Felicia: "I guess the moral of the story is just don't do this game."