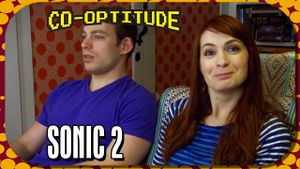 Felicia: "I would have thought you'd like, if you were gonna try to copy Mario it would be—"

Felicia: "A French carpenter! And then you go— You don't want a human, so I would say a seal."

Ryon: "A seal? Holding woodworking tools between its flippers? Henry."

Ryon: "Meal worms? The natural diet of all seals."

Felicia: "So that's the game they should have made."

Felicia: "Dude, I don't know how we can fuck something up this early, but we did it."

Ryon: "I can't imagine a less fun game for the second player. Like this is seriously like infuriating me."

Ryon: "'You have to play! You have to let him play with you! You know how he gets. Violent.'"

Felicia: "Tails started meth when he was like four. I mean look at him, he's on meth right now."

Felicia [reading about Tails]: "He did have a spinoff. So basically his agent got in there and was like—"