Felicia and Ryon play Crypt of the NecroDancer. 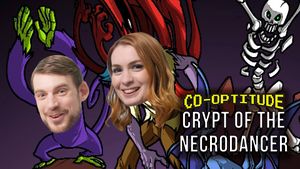 Ryon: "What is that on your shirt?"

Ryon: "It looks like those candies that come on the wax paper sheets. Do you know what I'm talking about? What are those called? It's like little sheets of paper and it's got candies on it? What is it called?"

Felicia: "Nobody knows— Oh, I know what you're talking about. Oh, that's a horrible candy."

Felicia: "It's horrible. It's like butt in your mouth. It's not good."

Felicia: "This is a show where I play games with my brother."

Ryon: "And I play games with my sister."

Ryon: "Four— 'Three, four'. Are you just hedging your bets there?"

Felicia: "Well, when I look back at old Co-Optitude episodes I was like, 'You should have taken advantage of that younger face.'"

Ryon, bewildered: "What does that mean?"

Ryon: "Is that what you're trying to say, is that you regret the precious moments that we've shared together for the past four years?"

Felicia, mumbling dispassionately: "No, not this, not this. I don't regret this."

Ryon: "Wow, that sounded so sincere."

Ryon: "'I'm so happy to be here with my biggest regret of the past half decade.' Well, I'm outta here! See you later!"

Felicia: "Do you know that Killers song, 'Only human, we all are dancers.'"

Felicia: "'Are we humans or are we dancers?'"

Ryon: "I don't think that that is a dichotomy. I think you can be a human as well as dance. That's just one man's opinion!"

Felicia: "I think logically, the Venn diagram— Yeah. Can you dance and not be a human?"

Ryon, gesturing toward the game: "I think we're gonna find out."

Felicia: "Well no, I don't think we're playing non-humans, but I'm saying, is a bear dancing really dancing, or is it just trained to look like they're dancing? What about— no, a horse?"

Felicia: "They're imitating dancing when a human taught 'em to pretend to dance."

Ryon: "But isn't that still dancing?"

Felicia: "Is the act of dancing just moving steps or is it your soul?"

Ryon: "You're saying animals don't have souls now. This is incredibly offensive. I'm sorry to my viewers."

Felicia: "I think animals have souls, but will music move their souls to dance?"

Ryon: "I have no idea what you're talking about, but—"

Ryon: "—all I know is that I saw a Vine where a bird was like bobbing to music, and I was like, 'that motherfucker is dancing.'"

Ryon, laughing: "You're not even talking in the beat. It's the whitest thing you've ever done, right there. Droppin' your phat lyrics. Your lyrics are fire. This is good."

Ryon: "Boy, you should do a rap battle on The Flog. What are you doing?"

Ryon, laughing: "You just rhymed 'stairway' with 'stairway.' This is good."

Ryon laughs as he facepalms

Felicia, to beat: "Screw that dagger… that's not okay."

Felicia, to beat: "Thanks for the gold, you assholes. I am never going to be a rapper!"

Ryon, laughing: "Well, you could have spent the previous four years learning, but you spent it with Co-Optitude instead."

Ryon: "That skeleton is getting his groove on!"

Felicia: "You got a wide sword though, don't you?"

Ryon: "That's what the ladies say."

Felicia, beating on armrest: "Can you go down the stairs and have me play! I'd like to play some!"

Felicia: "I had some cheese from France—"

Felicia: "—and I wasn't wearing pants."

Felicia: "I've already lost a health. It's not good. Don't know how to rhyme 'health.' It's stealth! Yeah!"

Felicia: "If only I had stealth! Yeah, let's just retcon that, and I said it."

Felicia: "You know what, the fun of this game is just grooving, okay?"

Felicia: "Yeah. Have you done any rhymes at all? You won't even try."

Felicia: "This game would be much better if we didn't have to talk to the audience at all."

Felicia, to beat: "For dinner… I want a burger… and some fries. If you do good… you'll definitely try."

Felicia: "Hey… I'm gonna demonstrate… that I can go ahead and rate… this awesome game, which would be, uh… uh… awesome… awesome game."

Ryon: "Yeah, 'game' rhymes with 'game,' guys! You know, you take every small victory you can in life, I find. And 'game' does rhyme with itself. I think it counts! Okay, well, I don't know if I can top that."

Felicia: "I'll say ten. And then you go ahead… and put it in a pen. And I'll say… that we go… and we'll… have to find… to go eat snow. [long uncomfortable look into camera]"