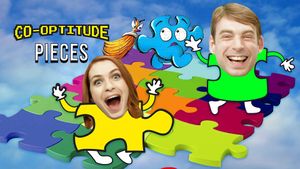 Felicia: "So, we're playing a really fun game today. It's called Pieces, and it's kind of like a puzzle, where we're—"

Felicia: "I had one [puzzle] of two gray kittens going [makes a face], and I hated those kittens more than anything because I could never finish their faces."

Ryon: "That's a nightmarish scenario, just like, you couldn't put their eyes right. Just eyeless kittens staring up at you. I don't know, I can't count the number of unfinished jigsaw puzzles that there have been in my life."

Ryon: "No, you're not even anywhere near a roll."

Felicia: "Oh god, you're beating me!"

Felicia: "Oh, if you kinda look then you can see where things go."

Ryon, laughing: "Pro tip! 'After many years of studying jigsaw-ology, I came up with a few simple tips. The first one is—'"

Ryon: "'If you look at the puzzle you can sometimes tell where pieces go. That's your tip for today!'"

Off-screen: "Those are power-ups on your right, by the way, Ryon."

Felicia: "How is he getting power-ups?"

Ryon: "Power-ups dude, are you kidding me? I don't need that shit."

Off-screen: "Felicia, his power-up's telling him where to place them."

Ryon: "No it's not. I don't even know what you're talking about, dude. That's not even true, man. I'm not even using power-ups, man. That's not—"

Felicia: "You are too! You're a cheater!"

Felicia: "You're a cheater! This is the stupidest game!"

Felicia: "It's a clown? What the fuck is this?"

Ryon: "No, dude, it's an alligator man. Don't you know? If you don't have empathy for your subject, you're never gonna be a good jigsaw artist, man."

Felicia: "You're not a 'jigsaw artist', okay, for the record."

Felicia: "I hate this game. I hate it more than anything. Zac just picked this to make me look like an idiot."

Ryon: "Well, you're making yourself look like an idiot! That's the problem."

Felicia: "I'm actually using the cheats and they're very good."

Felicia: "Why would an alligator be a sailor? That's my question."

Ryon: "You know, shut it up. Shut your filthy fucking mouth, dude."

Felicia, after Ryon silently activates a cheat that punishes her: "Oh, you're blocking me? Did you power up to block me?"

Felicia: "I can't believe you did that."

Ryon: "You're shitting me, dude, accusing me of this."

Felicia: "I mean, I honestly think you're an awful person."

Ryon: "Accusing me of this garbage, dude."

Felicia: "You faked me out!"

Ryon: "Look, man, your problems are your own."

Felicia: "You're fucking with me with some kind of power-ups!"

Ryon: "Why do you do that, dude? Why would— You're paranoid. You're delusional."

Felicia: "Okay, I'm not paranoid. What did you use to sabotage me?"

Ryon: "I don't know what you're talking about, man."

Felicia: "You're messing with me! You're using power-ups that are immoral!"

Ryon: "'Immoral'? Dude, morality has nothing to do with game power-ups, if I were to use them, that is what I would assert."

Felicia: "You're fucking with me! You're making me go backwards, you awful human being!"

Ryon: "Look, I have no idea what you're talking about. You… need…"

Felicia: "You need to shut the fuck up or I'm going to kill you."

Ryon: "I'm trying to be helpful by finishing before you do!!! [completes puzzle]"

Felicia: "Fuck! You fucked me!"

Ryon, feigning offense: "What? No! What are you talking about, man?"

Felicia: "You fucking ass. Oh my god, I hate you."

Ryon: "What is wrong with you, dude? This is so unlike you."

Felicia: "Like, you are a savant. I can't even be angry at you right now. Like, it's almost like being mad at Mozart for being able to compose."

Ryon: "I'm the Mozart of Pieces? That's a dubious compliment at best, dude."

Ryon, activating cheat: "I think you're doing a little too—"

Felicia: "I'm literally— I'm never inviting you back to this show. This show is no longer yours."

Felicia: "I don't wanna play this."

Ryon: "Come on! You're doing good, man! Come on, buddy, look at you go. Look at you put them pieces in correct places."

Felicia: "Everyone is going to hate you when they see this episode."

Ryon: "I know. I hate myself right now a little bit. It's fine. [completes puzzle] Oh man, that was hard. Whew!"

Felicia: "When I was ten years old and never had a Nintendo, did I think when I grow up and be an adult woman that I would be publicly humiliated in many formats for being incredibly bad at Pieces?"

Felicia gives Ryon a death look and he scoots away

Felicia: "Join us next week when our new cohost, Hector Navarro joins me—"

Ryon: "Ryon Day disappeared under mysterious circumstances in the Nevada desert, but the show must go on."

Felicia: "He got on a plane and we never saw him again."