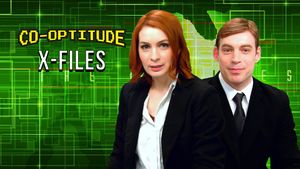 The X-Files episode is a fan favorite, with lots of riffs on the antiquated game style consisting of "navigating through an Instagram feed" and brief full motion video transitions, as well as the show and its characters. But this episode is mainly remembered for its unexpected sudden ending.

Ryon: "We're gonna solve some crimes. I dunno, I mean, nothing in the X-Files could be considered a crime, specifically. You know, like alien invasion's not really a crime. Mulder was like the FBI equivalent of the guy in Office Space with the red stapler. Like, they don't know why he's employed there. He just has like an office in the basement and they just pay him. Can you imagine Mulder's annual performance review?"

Felicia: "No, there would be no performance review."

Ryon: "'Let's see how your goals lined up with your achievements, Fox. I'm thinking we need a little improvement here in the crime solving.'"

Ryon: "That is an art form. The local Michael's, like constantly out of twine. Like, 'Sorry, the FBI just bought us out of twine this week.'"

Ryon: "There's been a crime at the wooden pallet warehouse."

Ryon: "This credit sequence looked so cutting edge, and now it just looks like the cheapest thing that's ever been done. They've got an Etch-A-Sketch, they've got one of those things from Spencer's. Look at this, it looks like an A-Ha video."

Felicia: "Someone needs to take their finger off the synthesizer, please."

Ryon: "They just fell asleep on it. It's someone's head on the keyboard."

Felicia: "You go to the Comity Inn."

Felicia: "Are you kidding? Did you just say 'bonhomie'? What, do you own a cafe?"

Felicia, as they look through a zoo brochure: "Oh, can we call them? If this doesn't work, I will call Chris Carter personally and say, Chris—"

Ryon: "Chris, what were you thinking? Okay, ready? Shh-shh. Just let it go to voicemail, or answering machine, whatever."

Felicia, as phone continues to ring: "I'm so disappointed. Why would they put something in the game and make us look at it and not pay it off with Sophie [the gorilla in the brochure] personally answering the phone?"

Felicia: "Okay, please, click on her. Talk to her, please."

Ryon: "Hold on. Look, obviously you would not be—"

Felicia: "Put your lips on her boobs and go."

Felicia: "49 failed pointer attempts to get something done"

Everything about this episode makes it a classic. The game itself is such an anachronism with its FMV-heavy gameplay and obviously dated subject matter. The hosts' riffs are just nonstop, and they find something funny in everything, from the more obvious absurdities of the game mechanics to more ordinary things like the name of the Comity Inn. The editing is well paced to always have something interesting going on. And of course, it has the most memorable ending of any episode when their efforts to subvert the game's no-nonsense tone go awry. The uncontrolled laughter of Ryon and the off-camera crew while Felicia sits stunned, trying to absorb what just happened is such a high point of the series. When asked to list favorite Co-Optitudes, X-Files is in most people's top 3.