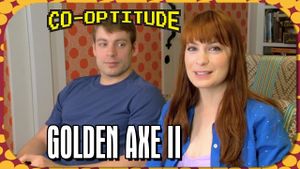 This is the first episode of Co-Optitude. It's a spin-off of The Flog in which Felicia had recurring segments of playing retro games with her brother, Ryon.

Felicia: "Those guys are made out of Chicken McNuggets."

Ryon: "And what is that at the top of the screen? He is hung like a chimney."

Ryon: "Oh, what did I just get? It just fell on me. It's like you hit him and he shits books."

Felicia: "Well, if we had played like anybody's business!"

Ryon: "You're seeing the softer side of the undead."

Felicia: "Have you ever burned human bones?"

Felicia: "[…] Which is even more insulting, because if I'm the magician character, why are my boobs out so hard?"

Ryon: "I'm gonna sit back and watch. I'll let you make 70% of my salary. […] Seventy percent of my adventuring salary."

Ryon: "Yeah, you get 70% of what I get. That's more than fair because you might take adventurer maternity leave, and then it's like where are we then, you know?"

Felicia: "You're a single dwarf."

Ryon: "I'm a dwarf rights activist. That's what I am."